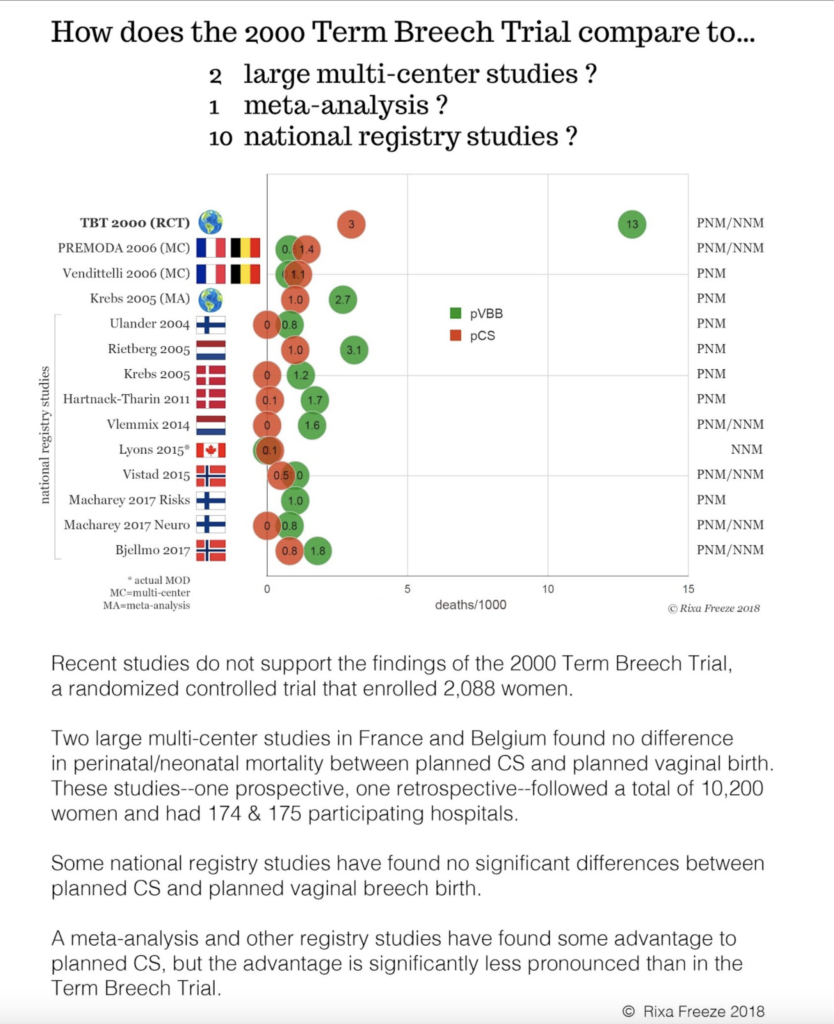 “Planned caesarean section is better than planned vaginal birth for the term fetus in the breech presentation; serious maternal complications are similar between the groups.”

“Planned cesarean delivery is not associated with a reduction in risk of death or neurodevelopmental delay in children at 2 years of age.”

“Maternal outcomes at 2 years postpartum are similar after planned cesarean section and planned vaginal birth for the singleton breech fetus at term.”

“Hannah et al’s trial showed a significant increase in perinatal mortality and morbidity in women randomised to a trial of labour compared with elective caesarean section.1  The trial’s methodological flaws have been examined,2–4 but the intrinsic limitations of applying large scale randomisation to complex phenomena have received little attention.  These limitations are the focus of this paper.”

“Most cases of neonatal death and morbidity in the term breech trial cannot be attributed to the mode of delivery.  Moreover, analysis of outcome after 2 years has shown no difference between vaginal and abdominal deliveries of breech babies.  The original term breech trial recommendations should be withdrawn.”

“The ‘knee-jerk’ response of the national organisations of obstetricians to the original study should also lead us to reconsider how we respond in general to the publication of clinical obstetric papers in high-impact general medical journals, and the influence they have had in changing the face of contemporary maternity care globally5,6. It highlights the risks of unquestioned international consensus, where individual errors of clinical judgement may be superseded by collective errors of judgement on a grand scale, potentially causing harm to large numbers of patients1.”